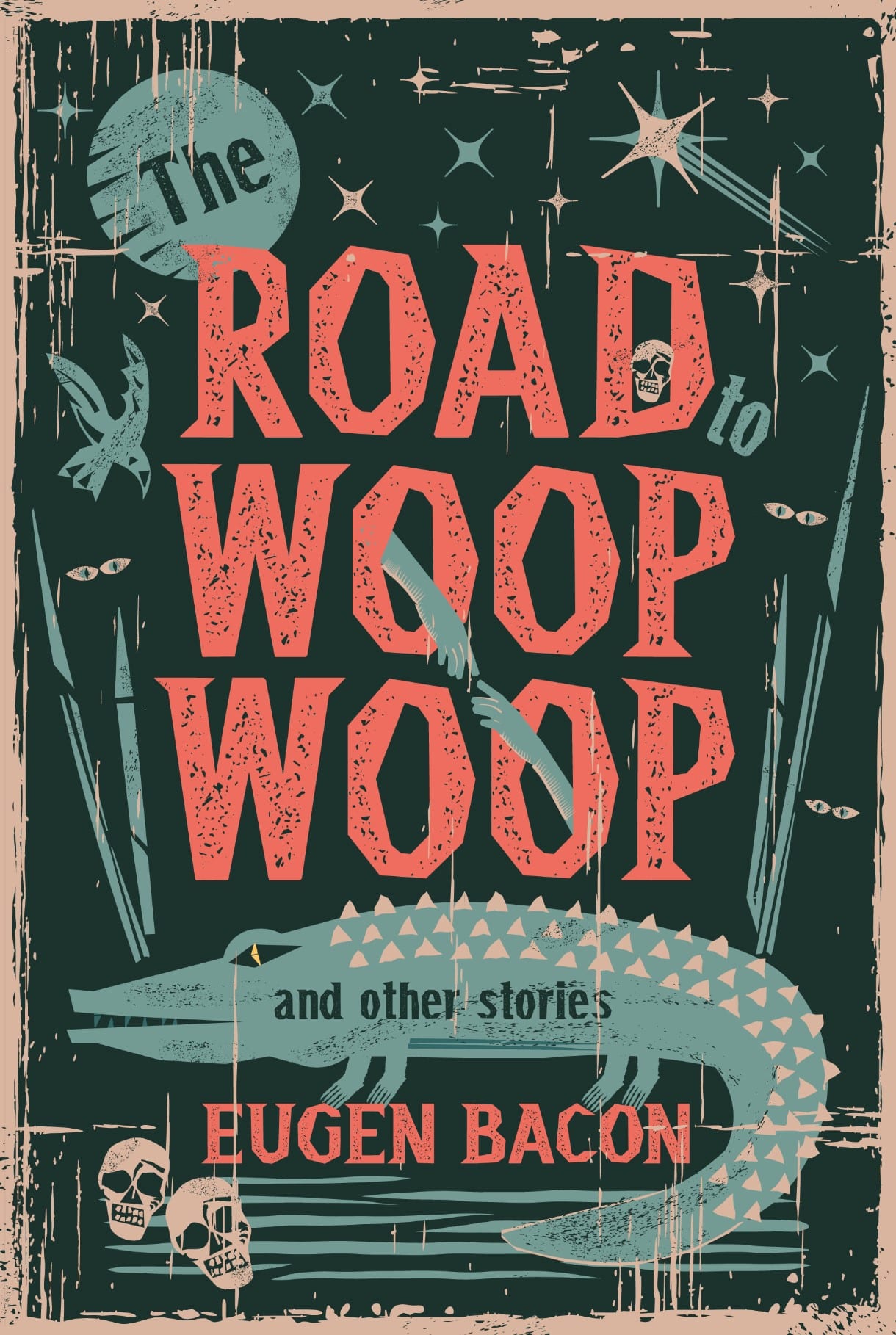 Eugen Bacon’s work is deemed cheeky with a fierce intelligence in text that’s resplendent, delicious, dark and evocative. NPR called her novel Claiming T-Mo ‘a confounding mysterious tour de force’. The Road to Woop Woop and Other Stories imbues the same lushness in a writerly language that is Bacon’s own. This peculiar hybrid of the untraditional, the extraordinary within, without and along the borders of normalcy will hypnotise and absorb the reader with tales that refuse to be labelled. The stories in this collection are dirges that cross genres in astounding ways. Over 20 provocative tales, with seven original to this collection, by an award-winning African Australian author.

Order Now!
About the Book

Bacon delivers a commanding and visionary collection of speculative shorts, encompassing surrealism, fantasy, science fiction, and gorgeous, painterly literary fiction. It would be a disservice to call any of these 24 stories the standout, as each is impressive and beautifully rendered in Bacon’s distinct, poetic voice. The stunning title story follows a pair of lovers on a tense road trip that grows increasingly surreal, told in rhythmic, abstract prose. In the moving “Swimming with Daddy,” a little girl reflects on how her father taught her to swim. The humorous “Beatitudes” tells of the first meeting of a young siren and a salesman who has been turned into a toad. Science fictional offerings include “Ace Zone,” about a young woman traveling from planet to planet to draft soldiers into her battalion, and “Playback, Jury of the Heart,” a tale of love that transcends time and space. Complex, earnest, and striking, Bacon’s impeccable work is sure to blow readers away. —PUBLISHERS WEEKLY (Starred Review)

The 24 stories that make up Eugen Bacon’s new collection The Road to Woop Woop and Other Stories run the gamut in terms of tone, genre, and structure. There are experimental, modernist pieces reminiscent of the New Wave, namely ‘‘A Good Ball,’’ ‘‘The Enduring,’’ or ‘‘A Man Full of Shadows’’; playful, self-aware tales such as ‘‘The Animal I Am’’ and ‘‘Wolfmother’’; and reflective, melancholy stories like ‘‘Swimming With Daddy’’ and ‘‘The One Who Sees.’’ As Seb Doubinsky rightly points out in his Foreword, what ties the collection together is Bacon’s distinctive voice (which Doubinsky compares to free jazz) that nimbly shifts between the lush, the opaque, and the colloquial (Bacon, like myself, is fond of Aussie slang) . . . Bacon’s passion for language and her willingness to play with the short-story form, to never settle on one type of narrative or genre, make this an exciting collection that’s well worth picking up. —Ian Mond, LOCUS MAGAZINE

In Australia, the slang expression ‘woop woop’ can be used to describe ‘the middle of nowhere’. However, each  of these twenty-four distinctive stories took me on a journey which always ended up somewhere, even if that final destination wasn’t quite where I’d imagined it would be and, in a nutshell, that captures for me much of the magic of Eugen Bacon’s awesome storytelling. —Linda Hepworth, NB MAGAZINE (5 stars)

Eugen Bacon writes assured, lyrical prose wherein timeless tales bordering multiple genres are hunkered. At the conflux of myth and memory, where cultures meet and twine, her stories devour the past whilst illuminating the future. Reading Bacon is an immersement, a journey. The stories she tells are those to relish. — Andrew Hook, award-winning editor and author of Frequencies of Existence

An exciting and transcendent literary experience with an air of magic anybody should be able to appreciate. —Maddison Stoff, Aurealis Reviews

Delightful, depressing, delicious, desirable, fulfilling. The stories gathered here are airy and prismatic, and the gravitas of Bacon’s worldview does not preclude intimacy or mischief. Many cultures converge and challenge each other in this collection and these prove to be at odds with the equally pressing need to be an individual in the world. The answer is often to weave myths and fables from different traditions imbued with the politics of gender and race, perhaps best illustrated in the persona of the Phoenix which recurs in different guises and with different attributions throughout the book. —Dominique Hecq, award-winning poet, novelist, short story writer

Eugen Bacon writes with cheekiness and a fierce intelligence that shines through every page of her work. Right from the first sentence, the voices of each of her narrators grab the reader with their lucidity, their panache, and their uncompromising observational rigour. This rigour manifests itself in the freshness of Bacon’s prose, making the reader reconsider all expectations related to genre, identity, and gender stereotypes, and opening up new possibilities with every turn of phrase. Her work may be rooted in the conventions of sci-fi, yet its speculative nature is grounded in the most surprising, realistic details that serve to blur the boundaries between literary genres and suggest a more fecund apprehension of what literature might be. Bacon’s narration sometimes borders on the erotic, sometimes on the raw truth of human frailty, but is always delightfully subversive and unapologetically transgressive. When Ursula K. le Guin said that fiction, poetry, drama “cleanse the doors of perception”, perhaps she was talking about this invigorating quality present in the work of Eugen Bacon. If Bacon’s shorter works are any indication of her handling of longer narrative arcs, then readers of her forthcoming novel are in for a delicious and satisfying treat. —Roanna Gonsalves, award-winning author of The Permanent Resident

Bacon’s imaginings are especially resplendent in their connection to Australian and New Zealand cultures, both traditional and acclimated, and shows the unique beauty of speculative fiction Down Under. Whether exploring our fears in the modern landscape, complete with Uber drivers and spying satellites, or through strange landscapes and the eerie minds of quirky protagonists crafted from crisp, punchy prose, one cannot leave without a new appreciation… or depreciation… of death. Bacon’s stories are simultaneously powerful, yet subtle and endearing.  —Tamantha Smith

Each story in the collection is vastly different from the next—in voice, setting and length. Yet the book comprises an assemblage of narratives that flow seamlessly from one to the other, with snappy dialogue and striking imagery that roll off the tongue and widen the reader’s eyes.  —Angela Wauchop, Other Terrain

This is a book to curl up with on a rainy winter afternoon, when you can give each story its due and reflect on it afterwards.  —Kris Ashton (award-winning author), Andromeda Spaceways Magazine

Bacon’s stories are languid, endlessly strange things, and she makes them seem effortless. The Road to Woop Woop pushes boundaries, blurs genres and folklores, and reminds us once again of her dazzling, unique voice. No one writes like her. —Keith Rosson, award-winning author of Road Seven, Smoke City and The Mercy of the Tide

The Road To Woop Woop is paved with wildness and color: vivid and surreal, haunting and hallucinatory. These visions—of the fantastic past, the impossible future, of an Australia or an Africa or an almost-familiar somewhere—are psychedelic in their otherworldliness and alive with the ancient rhythms of folklore and fairytale, heavy with the magic of deep time. In sensual, synaesthetic prose, Bacon crafts unforgettable stories with an imagination and style that transcend genre. —J. Ashley-Smith, award-winning author of The Attic Tragedy The Road to Woop Woop, and Other Stories Reviews

Get the Latest News!